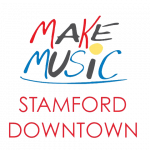 On Tuesday, June 21st, Stamford Downtown will join hundreds of cities for Make Music Day, a free celebration of music around the world. Launched in 1982 in France, it is now held on the same day in more than 1,000 cities in 120 countries. Every kind of musician–young and old, amateur and professional, of every musical persuasion–will perform in parks and sidewalks to share their music with friends, neighbors and strangers.

Interactive Sessions:
HARMAN Street Studio
12–4pm
Ferguson Library, 1 Public Library Plaza
Producers: Nandi Rose and Ana López-Reyes
HARMAN is bringing a mobile recording studio and world-class producers onto the streets for Make Music Day! In one afternoon, producers invite passersby from the community to join in a completely improvised music creation session. At the end of the day, each producer mixes down one track, using only the material recorded on-site, to share the sounds of their city with the world.

Free Drum Lesson
3-3:45pm
Ferguson Library, 1 Public Library Plaza
Join us for a FREE drum lesson on the Library Plaza instructed by John Cutrone.
Sticks and bucket will be provided.  Participants are welcome to bring their own drum.

Want to be a part of Make Music Day?  Learn More about Musician and Venue Sign Up >>>

with the support of the Department of Economic and Community Development, Office of the Arts, which also receives support from the National Endowment for the Arts, a federal agency.